Facebook is testing a new ad feature, which would display content from multiple brands within a single ad unit. It means that the Facebook new format is built on combining dynamic ad campaigns from two different advertisers in a side-by-side version of Facebook’s Collections ads. 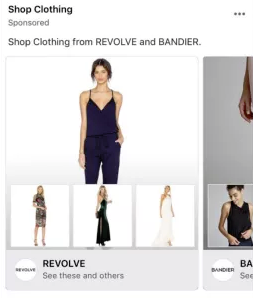 As confirmed by Digiday, this previous visual is flagged by Cameron Mills, who works in growth at e-commerce company Brandless. And as it is shown, this ad gathers content from two different brands within a single unit, with the bottom bar branding alternating on each frame within the carousel. The test of a new ad unit option is confirmed by the Facebook company and its spokesperson told Digiday more details about the new tested format. He mentioned that the new format is considered to be a very small experiment that gathers advertisers and brands who have agreed to participate in the test, in addition, the advertisers who will participate are all e-commerce and retail businesses. He also added that the new format will appear on ads that are created in the U.S., U.K., and Canada, during the test.

Additionally, Facebook’s product marketing manager, Mary Haile, also confirmed in her email to Digiday that the company will make an accurate evaluation to decide whether the new ad unit format creates value for people and businesses before deciding whether to expand it.

Up till now, there are more questions have not any clear answers, such as how this Facebook new ad unit format would work, would the ad’s costs be split evenly between the included advertisers or what, how brands would participate, or how much control they’d have over the partners they’re displayed with. In answering these questions, the Facebook spokesperson told Digiday that the Facebook company _including Instagram, Messenger, WhatsApp, and Oculus_ has not shaped the pricing model — if the unit is ever officially released. He also mentioned, “It’s questionable whether the brand featured second in the ad unit would be charged less in the auction. During the test, the participating advertisers are not being charged and are simply receiving free impressions if Facebook users see the ad and even if they choose to engage with it.”

Indeed, all of these efforts are considered to be valuable attempts from Facebook to enhance advertisers and brands’ experience when they are running advertising campaigns on the Facebook ads platform.