A few hours ago, it is reported that Facebook is running a new test on its ads’ services on the Facebook platform. It is testing a new Video Ad Poll Option, that will allow specific advertisers and businesses to add video polls to their Facebook ads. This Facebook new Video Ad Poll option will enable viewers to interact with the ad, with a dedicated poll included to help boost engagement. 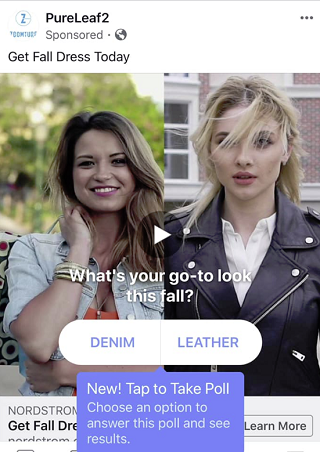 First, the testing of the Facebook new Video Ad Poll option is reported by social media advisor Matt Navarra, then the Facebook company confirmed that it is too early to talk about the new video ad feature, as it is still being tested by a small group of selected advertisers worldwide, so it is useless to discuss whether it’ll be made more widely available or not.

Recently, Facebook has put in appreciated efforts to enhance advertisers’ experience of Facebook ads, these efforts focus on boosting engagement and helping businesses, brands, and products push their conversions. Earlier in April, Facebook announced the launch of communal viewing ‘Premieres’ option to all Pages globally, which is built to help video creators boost engagement, and to help promote its Watch content by tapping into usage trends, in addition to allowing video publishers to air a pre-recorded video with all the features of Facebook Live.

After that, Facebook’s also rolling out video polls more broadly alongside Facebook Premieres. Moreover, it also expanded it’s ‘Top Fans’ program, a new tool that can identify your most loyal and engaged video viewers during the broadcast with ‘digital badges’, enabling you to prioritize interacting with them to further build community. Facebook mentioned that Top Fans will be available to any Page with over 10k followers. And, eligible Pages will be able to access Facebook Top Fans feature by using the video template, Pages will then also need to opt into Top Fans badges via their Page settings.