This week, Google is celebrating its 20th Anniversary since a pair of Stanford PhD students founded a search engine company based in their friend Susan’s Menlo garage. But, it is not only a celebration; Google also announces 4 new updates to its services and products worldwide.

Google’s first announcement mentions some new updates to Visual Results on Google platforms. These changes will include:

AMP Stories: Google has revealed that they’re working on making AMP stories more discoverable by querying them in both Google Image search results, as well as within Google Discover, aiming to enable publishers and content creators to launch pages that both load fast and come with an overall positive user experience. Earlier this year, AMP Story was launched by Google, in order to introduce fast-loading content that’s almost completely visual, and very immersive.

Featured Videos: Google also points out the launch of a new visual tool “Featured Videos”, which uses machine learning to enable users to explore the most helpful video content for their search queries. For example, when anyone visits a new situation for the first time, he can use Google “Featured Videos” tool to show him the videos that are the most applicable to his situation.

More Context for Google Image Results: In the same event, Google also announced that starting this week, Google Image search results will now have more context, which will include captions which show where the image is published, and more suggested, similar search terms at the top of the page.

As a second announcement, Google revealed its plan to change “Google Feed” feature name into “Discover”. First, Google launched “Google Feed” feature within its app, in order to make users informed with what’s new and discover content. But now, “Google Feed” becomes ” Discover” and its look also has been changed, aiming to provide more context. Discover also will provide users with several options that make them aware of latest trends, such as;

During its event, Google also announced the launch of a new helpful feature for their users, which called “activity cards”, an intelligent tool that’s considered to be visual representations of the users’ Search history. Activity cards also will help users retrace their steps during searching topics. Accordingly, pages they have previously visited while researching the same topic will appear in Search results.

Additionally, Google added a new feature Alongside “Activity cards” that’s called “Collections”, a new tool that enables users to add a page from their activity cards to a collection of content pieces on a given topic. 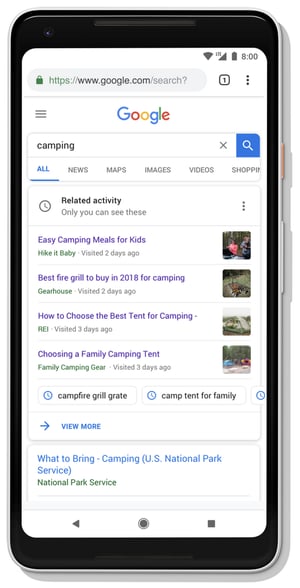