Two days ago, Snapchat announced on its official blog a new partnership between the Snap Inc. and Amazon, which will enable Snapchatters worldwide to shop for Amazon’s products at any time via the Snapchat platform.

Snapchat reveals that they are still testing a new tool which allows users to search for products on Amazon right from their Snapchat camera, starting from this week. It also points out that they will be rolling it out slowly in the near future. 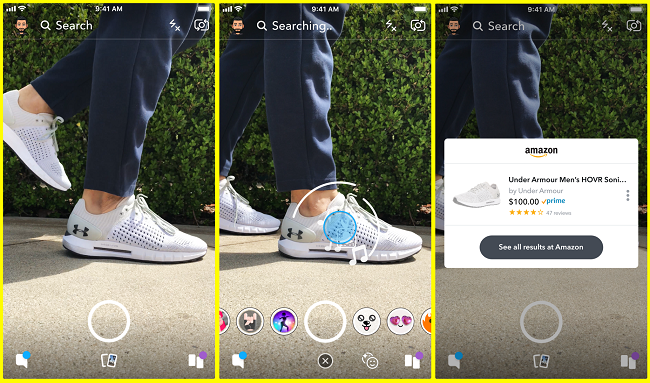 In commenting on this partnership, there are two notes that should be kept in mind; the first one is that back in July 2018, TechCrunch revealed that the Snapchat team is working hard on launching new visual product search tools, which was built on insights given by the back-end code of the app.

The second note is that this Snapchat’s Visual Search feature completely looks like the Pinterest’s Lens tool, which is a tool that helps users scan objects and find related visual matches on the Pinterest platform. But, the difference here is that Snapchatters will be directed to Amazon’s product library, unlike Pinterest’s Lens which directs users to an in-built product catalog.

To access to this Snapchat’s Visual Search feature, some easy steps should be taken as stated by Snapchat:

It is clear that recently, Snapchat is trying slowly to shift towards eCommerce similar to other social media platforms. Accordingly, last week, Snap Inc. has announced on its official blog that they are introducing two different webinars which focus on eCommerce on the Snapchat platform, within the coming days.

These two conferences -which were Deep Dive on the Snap Pixel and eCommerce Advertising on Snapchat- were built to provide a valuable set of insights which help advertisers learn how Snapchat can boost eCommerce campaigns, in order to enable them to make sure their campaigns are performance-ready and able to reach the targeted objectives.

Finally, we can say that Snapchat clearly knows that maintaining its value in today’s competitive market is not an easy mission, that’s why Snapchat is continuously working on providing an integrated platform for all Snapchatters globally.