/ News / The Google New Search Console Is Out of Beta Now

The Google New Search Console Is Out of Beta Now

A few hours ago, Google announced on its official blog the graduation of The Google New Search Console out of beta, that’s considered to be an important transformation in Search Console’s history.

Alongside graduating the New Search Console out of beta, Google also announced some new changes and updates _joining a set of reports and features launched in the new Search Console over the past few months_, such as Manual Actions report and a “Test Live”.

In the same context, it should be pointed out that before announcing this graduation; Google made several efforts and took a long journey in developing, launching, and adding new features to the New Search Console since they launched it at the beginning of the year. In June, Google rolled out “URL inspection”, a new tool that provides more information about the WebMasters searches, as well as providing detailed crawl, index, and serving information about their pages, directly from the Google index.

Then, in August, they launched three new features and updates to the New Search Console, which help all the web owners around the world to be fully informed of all their sites details, reports, analytics, and results, in addition, importing existing popular features from the old Search Console to the new product, including Links Report, Mobile Usability report, and Site and user management.

A few days ago, Google announced that they are adding some new features to the New Search Console, which focus on facilitating cooperation and accountability for the Google users, in addition, redesign the product around cooperative team usage and transparency of action history. And these updates were including the “Collaboration” feature and the “User management”, that enables all users to see and control user roles for all property users.

Coming to the latest update added to the New Search Console, which is “Manual Actions Report and Security Issues alerts”, serves the next objectives: 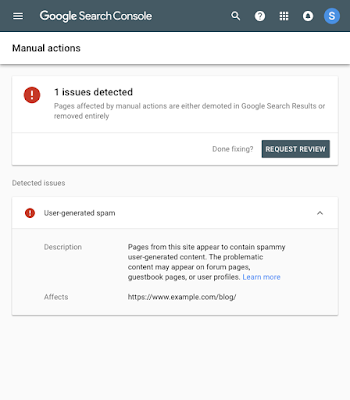 In the same announcement, Google also points to the ability to switch between the old and new products easily, in addition, they promise to continue working on moving more reports and tools as well as adding exciting new capabilities to the new Search Console.