Alongside its ongoing work to provide a platform that meets the expectations of all YouTubers around the world, YouTube also invests in Charitable work across its platform similar to the Facebook company and some of the social media platforms.

One day ago, YouTube announced on its official blog the launch of “YouTube Giving”, that’s considered to be the first YouTube effort in Charitable Giving in the recent time.

It’s one of the “YouTube Giving” new features, which enables creators and qualifying US-registered 501(c)(3) nonprofits launch and embed a fundraising campaign right next to their videos and live streams. It also lets fans donate -for causes they care about on the platform- to creator-led campaigns directly on YouTube via a “Donate” button. Fundraisers (beta) also provides the ability to make Creators able to create their campaigns, and YouTube will take care of the logistics and payment processing, itself. In the same context, YouTube says that the first beta period will be available to a limited group of creators in the US and Canada. 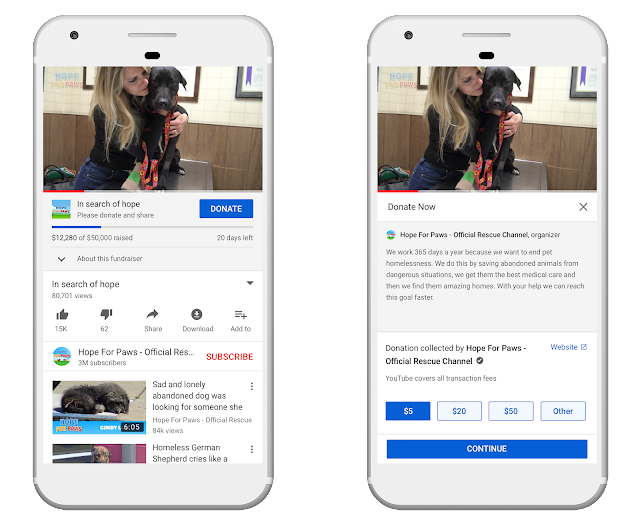 Alongside the Fundraisers (beta) feature, YouTube also launches a beta version of Community Fundraisers, that enables multiple creators to co-host the same fundraiser. It will be seen at the participating creators’ videos at the same time showcasing the collective amount of money their communities are raising together. Community Fundraisers (beta) feature is also available to a limited group of US creators and qualifying US-registered 501(c)(3) nonprofits, similar to the previous feature.

It’s an additional feature that will be rolled out in the coming weeks. It’s designed to help creators who lead Fundraisers and Community Fundraisers to receive matching pledges in order to strengthen their efforts. Campaign matching (beta) aims to encourage more fans to get involved in the Fundraisers campaigns and maximize impact.

Alongside the previous three new features, YouTube also is rolling out Super Chat for Good, a new feature that makes creators able to raise funds for qualifying US-registered 501(c)(3) nonprofits on live streams and Premiere videos. Based on that, a qualifying nonprofit will be able to receive 100% of Super Chat for Good purchases, just when it’s selected by an eligible creator.

Finally, we can say that these YouTube efforts should be appreciated as it provides the ability to let users participate and create an impact on important issues, whether helping out in a crisis or championing a cause.