It seems like the most logical way for Facebook to close out in 2020. We can see that last week, reverse engineering expert Jane Manchun Wong shared images of a new look Facebook Help Center, with updated controls tools to help users find the answers they need. 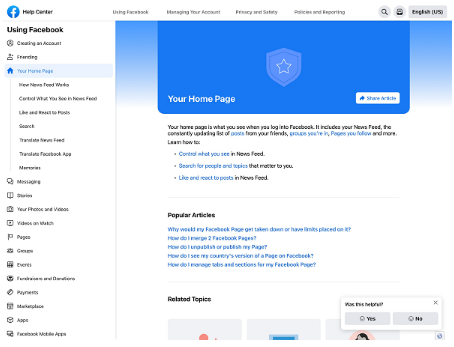 This Facebook Help Center update was later confirmed by Facebook – as explained by Facebook’s Alexandru Voica: “We redesigned the Help Center to help people find the information they’re looking for faster, with an improved and streamlined navigation and a user experience that’s consistent with the rest of Facebook.com. We’ve also made search easier to use and refreshed the most popular topics to reflect what people want to learn about today.”

This is so cool, right? Facebook Help Center experience, which is more in-line with common usage. Helpful, right?

Moreover, looks like the Facebook Help Center update hasn’t had the intended impact – yesterday, Bloomberg reported on the many small advertisers who have had ongoing issues with Facebook’s ad systems, with the primary concerns being a lack of assistance tools and arbitrary or incorrect account suspensions.

As explained by Bloomberg: “A big part of the issue, according to Facebook advertisers, is that the company doesn’t have a robust set of customer service systems in place for smaller advertisers. Facebook brags that it has 10 million advertisers, but the majority of them don’t have a regular human contact person within the social network to resolve issues. The company offers an automated chat feature for advertisers, but you need an active Facebook account to use it, which means it’s not available to users who have been accidentally locked out.”

However, such concerns have been present for years, but with Facebook recently launching a fight against Apple’s coming IDFA changes, in which Facebook claims that it’s acting on behalf of small business owners, looks like it has raised questions as to how much Facebook actually cares about SMBs, and how its systems reflect that focus.

Additionally, Part of the issue is scale. As noted by Bloomberg, Facebook now has over 10 million advertisers, which means that it needs to rely on a level of automation to answer the many questions being thrown at it. It simply can’t manually cater to every request and issue, which is what’s lead to problems with its automated account suspensions along with lack of follow-up capacity.

Also, the logical cause is obvious, however, that doesn’t make it any easier for the businesses struggling to get their questions answered, with incorrect actions like this costing time and money.

For now, Facebook’s likely hoping that a revamped Help Center will somehow provide some help, but ideally, The Social Network is also taking note of this new pushback and working to revise its systems in line with advertiser need.

Moreover, Facebook has also had to rely more on automation in 2020 because of the COVID-19 pandemic reducing its regular staff capacity, at a time when many more businesses have turned to the social media platform for their promotional efforts.

That’s likely to lead to more people facing issues with their Facebook ad accounts than ever, which Facebook may be able to reduce in 2021 once things can return to a level of normal once again.

That will definitely be Facebook’s hope, however, it’s obvious that there’s a growing concern about Facebook’s ad support systems, along with demand for improvement.

Whether Facebook has the ability to facilitate such is another question, but as it continues to battle Apple, and present itself as the champion of SMBs, this is a fundamental area where Facebook could strengthen its positioning.