Washington post mentioned that Facebook has shared an internal overview of is “WoW Project”, which will put increased focus on removing hateful comments directed at Black people, Muslims, people of more than once race, the LGBTQ community, and Jews.

Facebook is reportedly looking to overhaul its approach to hate speech, to better detect and address “the worst of the worst” cases, as opposed to treating all hate speech incidents equally.

Moreover, Facebook has confirmed that it has made changes to its hate speech approach, however, it hasn’t detailed the specifics.

In light of that, Facebook says: “We know that hate speech targeted towards underrepresented groups can be the most harmful, which is why we have focused our technology on finding the hate speech that users and experts tell us is the most serious. Over the past year, we’ve also updated our policies to catch more implicit hate speech, such as content depicting Blackface, stereotypes about Jewish people controlling the world, and banned holocaust denial.”

This update comes after Facebook saw a major flashback earlier this year over its inaction on perceived hate speech shared by US President Donald Trump.

Amid the #BlackLivesMatter protests, following the murder of George Floyd at the hands of police, President Trump posted this comment, which many viewed as incendiary. 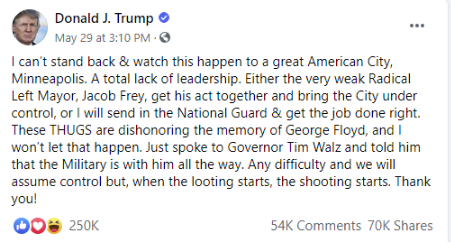 Moreover, that lead to civil rights activists calling for a boycott of Facebook ads, and that saw many big brands pausing their Facebook ad spend in July.

Facebook met with many groups at the time and then vowed to make changes to its policies.

Reportedly, Facebook then began outlining its new “worst of the worst” hate speech approach to staff in October, incorporating key elements of its learning based on these meetings.

Talking more about this approach can help Facebook better address some main areas of concern, besides working to further align the social media platform with the incoming US leadership.

Facebook has walked a fine line when dealing with President Trump and his comments on the social media platform, however, with Trump set to move on next month, Facebook ma actually need to evolve its policies to better move in-step with President-elect Joe Biden, who will be looking to take a more progressive approach than the Trump administration.

However, this can actually make Facebook come under more pressure – in a recent interview with The Atlantic, for example, former US President Barack Obama, to whom Biden served as VP, noted that misinformation shared on social media was “the single biggest threat to our democracy”:

“Now you have a situation in which large swaths of the country genuinely believe that the Democratic Party is a front for a pedophile ring. This stuff takes root. I was talking to a volunteer who was going door-to-door in Philadelphia in low-income African American communities and was getting questions about QAnon conspiracy theories. The fact is that there is still a large portion of the country that was taken in by a carnival barker.”

Facebook will definitely be looking forward to updating its policies because Biden will look to increase pressure on Facebook.

We can see that Facebook is already spending big on Washington-based lobbyists as it seeks to maintain ties, besides avoiding increased scrutiny on different fronts.

That means we could see a lot of policy shifts from The Social Network over the next four years.