This could be really helpful for those looking to re-purpose their video assets, and/or run experiments without having to invest in significant re-shoots or editing.

Taking more about this, back in March, As stated by Facebook that it has started testing a new ‘Smart Cropping’ option for video editing within Creator Studio, the “Smart Crop” feature utilizes machine learning in order to identify areas of most interest within your video content, and then provides auto-edits based on these calculations.

As we see, Facebook is making the new “Smart Crop” feature more widely available, with the option now accessible in the video upload flow within Creator Studio.

As you can see in the following screenshot, with Smart Cropping, you can automatically generate a 1:1 or 4:5 version of any video clip, with Facebook’s system identifying the key focus elements, and optimizing based on these points. 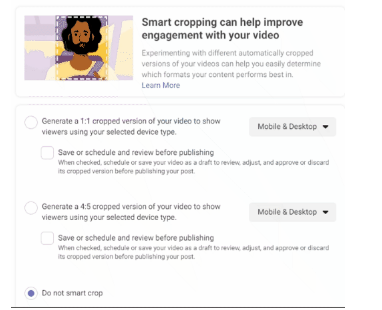 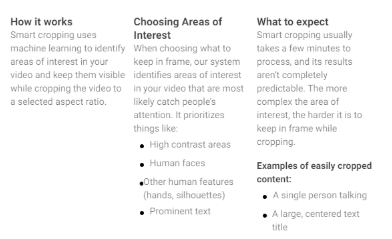 Facebook uses similar technology with its Portal video calling device, which automatically pans and zooms as you chat, ensuring speakers always remain in the frame. Not only that but also Portal will automatically widen when someone else enters the room, and this is the same type of object recognition that Facebook’s now applying to its automated video cropping, which sounds as though it could produce variable results. However, for certain types of uploads, it could also save you a heap of time.

At the least, if you’re working with a lot of videos, it could be worth an experiment. The new “Smart Crop” feature is now available in Creator Studio in the ‘Upload Video’ component of the post creation flow.

Shout out to Ahmed Ghanem for posting more about the update.