As we expect Earth Day next week, and in order to mark the event, Facebook is adding some new volunteer features to promote community participation, not only that but also new data that underlines the need for increased action on improving climate change awareness.

In light of the new volunteer features, Facebook says: “Earth Day marks the anniversary of the start of the environmental movement that began in 1970. Today, we need to address global challenges like the climate crisis. We believe that connecting people with credible and creative content can help them learn more about an issue and inspire them to get involved.”

Moreover, underlining the need for education, Facebook recently conducted a survey in more than 30 countries, in partnership with the Yale Program on Climate Change Communication, the survey revealed that more than three-quarters of people now believe that climate change is happening, “but fewer understand it is caused mostly by human activities”.

Additionally, some 60% of respondents indicated that they want more information about climate change. In light of Facebook’s volunteer features, Facebook has been working to provide more tools on this front, via its Climate Science Information Center as well as new informational labels on climate-related posts, which direct users to further, credible information sources. 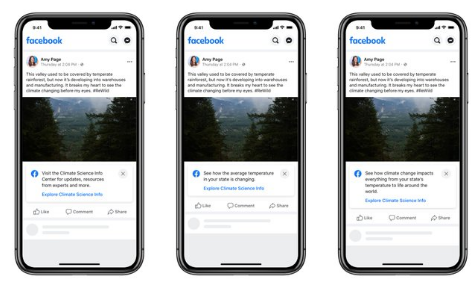 Well, that, ideally, will help to dismiss some of the misinformation around the issue – even though Facebook has also been criticized for allowing such counter-narratives to proliferate, even explicitly so, at times, via its policies.

Furthermore, last July, a report found out that Facebook had reversed its fact-check labels on some climate-related posts because it was asked to by a Republican congressman in the US. However, a month earlier, Facebook was also found to be allowing several climate denial posts to remain up on its platforms by tagging such as ‘opinion’, hence making it ineligible for fact checks.

In light of the new volunteer features, Facebook itself has played a part in fueling climate skepticism, so hopefully, this renewed focus, based on these new findings, will see Facebook take more action to combat debunked claims about the issue.

Additionally, Facebook’s launching volunteer sign-ups, to make it easier for organizations to find volunteers, also for people to sign up for opportunities on Facebook.

According to Facebook: “Starting in a few cities, people will be able to use Community Help to find nearby opportunities like planting trees in a park or picking up trash off a beach. People can also start drives to collect and donate essential items, such as food and clothes, which are some of the main contributors to landfill waste.”

Talking more about the volunteer features, obviously, this will help volunteer organizations better prepare people behind their causes, using Facebook’s reach to connect them with a broader pool of interested people.

Given the diverse narratives about climate change stemming from Facebook, it’s difficult to hold the social platform forward as a champion of the cause, as such, anyhow, it is working to promote climate awareness and use its reach to improve knowledge sharing.

Possibly, skepticism will always exist, and Facebook’s scale means that it will always help at least some of that discussion, so there’s not much more it can do to stop counter-science movements. But then again, as noted, the social platform has, apparently, endorsed such, at different times, due to political concerns.

So it’s a bit here and there – however, Facebook is, once again, looking forward to promoting important causes for Earth Day, while the company also says that it’s meeting its own renewable energy and emissions targets.

PR push or genuine concern? It’s largely in the eye of the beholder at this stage. Facebook has also shared this listing of ways that people can contribute on Earth Day. 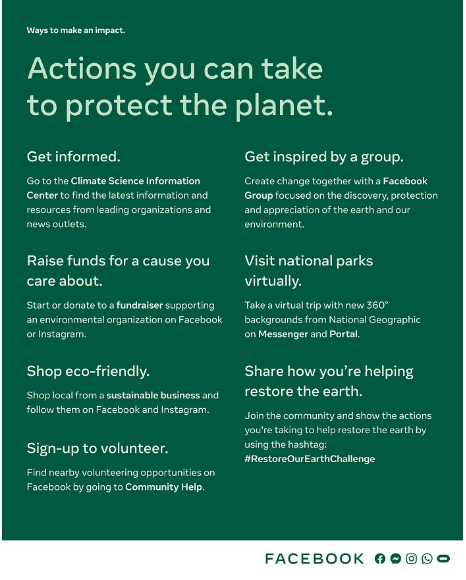