Now you can easily watch IGTV series from creators you love and get notified when there are new episodes.

On last Tuesday, Instagram released a new feature to its users to allow them to catch up their favorite new videos on IGTV from creators they love and get notified whenever they launch a new episode.

Now you can easily watch IGTV series from creators you love and get notified when there are new episodes.
👋@YaraShahidi @KadeSpice @IngridNilsen pic.twitter.com/0QmpHwpxYw

Instagram says that several creators are already making use of the features, including Black-ish and Grown-ish actress Yara Shahidi.

In order to activate the new features, creators can simply tap the ‘Add To Series’ option on their IGTV videos, and then add a mandatory series title (accompanied by an optional description). If a series has already been created, Instagram notes, creators can add episodes to the existing project.

It’s obviously noted that this option is already influenced by Snapchat’s ‘Snap Originals’ content which has seen increased success.

Snapchat released this option one year ago, in October 2018, and has made a real success story through this new tool. Snap announced on the last April, that the best performers within its Originals are seeing 28 million unique viewers in it’s first season, with one program, ‘Endless Summer’. 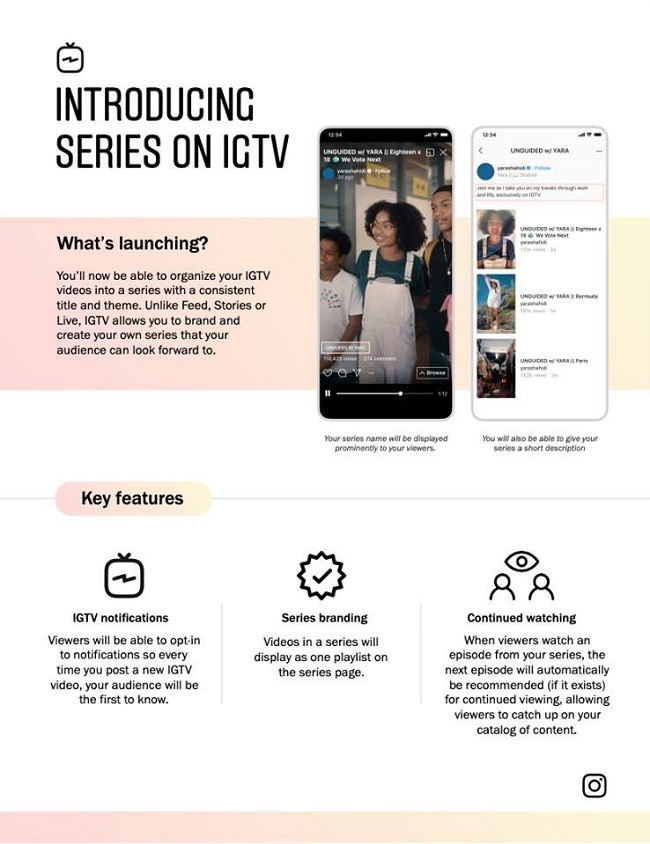