Messenger rolls out some new features for the holidays, and that includes influencer-inspired group AR effects, fresh Soundmoji options, featuring Taylor Swift, as well as a new test of bill-splitting within group chat treads.

Starting off with this, on the new group effects for video calls, which are interactive AR features that can be applied to multiple people in a video chat.

as shown below, the new features include a royal crown, a retro recording display, and more and more.

However, it’s not the features themselves that are the main note of interest here, it’s who Messenger has partnered with in their creation.

The social media platform has teamed up with different high-profile influencers from other apps for the initiative, that includes, King Bach, TikTok star Bella Poarch and Zack King.

In this regard, it looks like this could be another step in Facebook’s broader push to win back younger users, and this is by teaming with famous creators that they know in order to maximize awareness of its new group AR features.

Well, the Messenger’s new AR effects themselves don’t seem overly engaging, however, maybe, by tapping into these popular influencers, that could be a way to boost awareness, especially among their primarily younger fan bases.

Soundmojis, which Messenger launched back in July, display an emoji character that also plays an audio snippet, which the recipient can hear when they get the message.

On the other hand, Messenger is launching a new test of Split Payments, and that will enable users to the cost of expenses and bills easily. 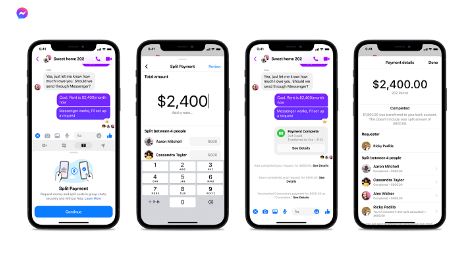 As shown above, with the new split payments option, Messenger will automatically divide the full cost among recipients, in which you can either include or exclude yourself from the equation.

Moreover, the payments can be facilitated directly in the app, via Facebook Pay, and that will make it easier to manage bill-splitting arrangements in an automated and transparent way.

Even though bill splitting could be helpful and prompt more usage of Meta’s tools for payments furthering its eCommerce push but the additions are fairly minor. However, partnering with popular influencers will no doubt have some effects in raising awareness of these new features.

The Messenger’s new AR effects and Soundmojis are available to all users, while bill-splitting is being tested in the US from next week.