In light of removing applications, Google has already taken down an Android service “Remove China Apps” that was handy to people in deleting other applications made in China.

The application “Remove China Apps”  had reached a major number of downloads, it had been downloaded over a million times just in its first 10 days after its launch. 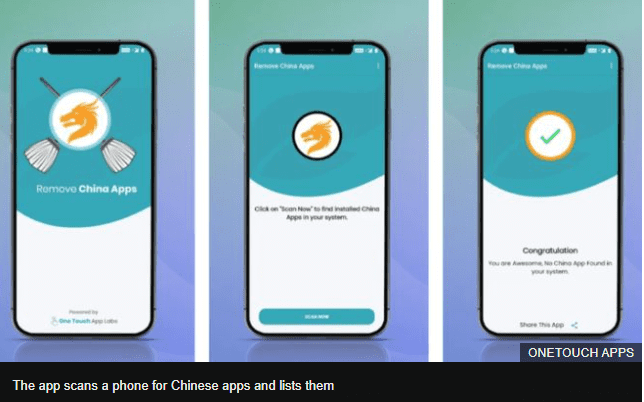 Specifically, it had proved popular in India, and it is where tensions with China are high over a disputed border in the Himalayas. According to what Google said about this matter this application violated its app store policies, however, Google gave no more details.

The software was developed by an Indian firm which is” One Touch AppLabs”.  As they mentioned on their website “Dear friends, Google has removed Remove China Apps from [the] Google Play store. Thank you for all your support in the past two weeks. You are awesome.”

The app –Remove China Apps- highlighted popular social media platforms such as TikTok, owned by Beijing-based Bytedance. On the other side, it flagged up the video-conferencing application Zoom, even though it is based in California but it was founded by an entrepreneur born in China.

However, Remove China Apps, was not able to detect apps that were pre-installed on Chinese-made smartphones.

Here is a list of some apps which were highlighted by Remove China Apps:

Anyhow, the app was popular on social media due to the fans who kept posting about it, and that was already on the rise after the emergence of COVID-19 in Wuhan, China.

Moreover, developers on Beluga Whale, which is an online community for China’s app makers, had already called on others to report the app to Google, as they call it a “form of market disruption”

It is noticeable that the tensions between India and China have risen after Chinese troops moved into what had been regarded by India as “its territory” in the disputed Kashmir region.

The Indian engineer, Sonam Wangchuk posted a video on YouTube suggesting that Indians should boycott everything that is Chinese. The video has had two million views to date.

Many hashtags have trended on social media such as: #boycottChina, #boycottmadeinChina and #boycottChineseapps. In light of that, Milind Soman, the Bollywood actor, who has more than 99,000 followers on Twitter posted a tweet saying that he had uninstalled TikTok.