We can’t tell if this is a good thing or a bad thing yet.

Last October, among a wide range of updates to Facebook Groups, unveiled at its annual Groups Summit, Facebook also announced a new feature called ‘Related Discussions’, which would prompt users to discover further conversations around a shared post by highlighting public groups in which that same post had been shared.

As you can see below, on posts that have been re-shared in groups, which have also appeared in your News Feed, a new purple, and blue conversations icon is shown, which, when tapped, highlights other places where that same link has been posted. 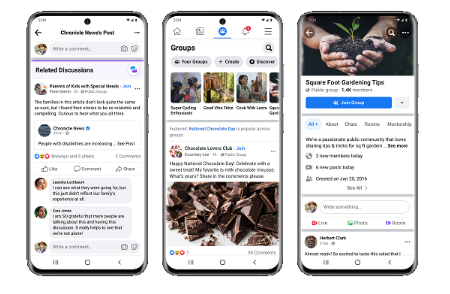 Talking more about the new prompt “Related Discussion”, Facebook explained that the prompt would enable you to “see what other groups” were saying about the same content, however, now, Facebook has expanded the option, so that more users are seeing the prompt, also more discussions are highlighted in the related discussion listings. 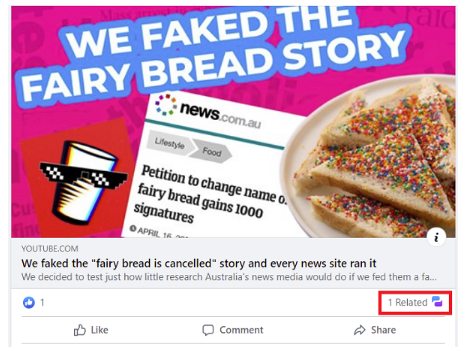 As you may have noticed in your News Feed, both in the mobile app also on desktop, the related prompt now shows up as an animated icon to grab your attention. When clicked/tapped it takes you to a listing of related groups where the same post has been shared, so you can see how other people are discussing the topic. 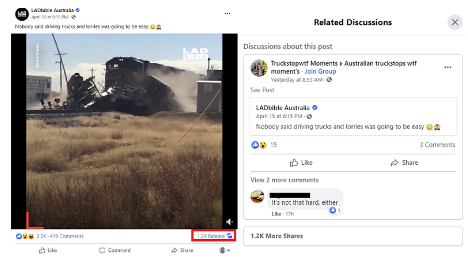 However, you can also now see even more discussion around the same. To do that, tap on the ‘1.2K More Shares’ prompt at the bottom of the second window, and you’re taken to a listing of both groups and individual Facebook users who’ve publicly shared that same post.

The new prompt “Related Discussion” could provide more context as to how people feel about a certain topic, while also prompting more discussion. Anyhow, it could also act as a lightning rod for division, with people’s public posts on each subject now open to even more users for retorts, criticism, arguments, etc.

Let’s see this example on the new prompt “Related Discussion”, if there’s a post about climate change, when when you see this post shared in your feed, you can tap through and see every other person who’s shared the same, besides what they’ve said about it. That could enable people to start arguments with strangers about their views, in a misguided attempt to ‘educate” them on the facts.

So, it seems like a risky expansion of the option, on the other hand, it will likely get more people talking.

Moreover, the pessimistic view is that this is what Facebook wants – by highlighting more discussions related to topics that you’re likely interested in, it’ll spark more engagement among users, which, even if it also leads to a rise in disagreement, will also boost overall engagement numbers.

Not only that but also, Facebook has repeatedly noted that this is not its aim, that people won’t keep coming back to Facebook if they have too many negative experiences in the app like this, so as obvious, it’s not actually in Facebook’s interests to promote divisive, argumentative content for the sake of its own engagement stats.

On the other hand, it does look like this expansion will lead to exactly that. Note that, the feature has been available for some time, anyhow, it’s now being expanded, so you might notice the animated discussion icon as you scroll through your feed.