Twitter is surely looking to add more Fleets features to improve engagement through the tool, however, it is slow. Regarding the Fleets option, Twitter has added a new Fleets option, it enables users to add a background video or image to their Fleets frames, via their device camera or Camera Roll, which significantly expands your visual communications options. 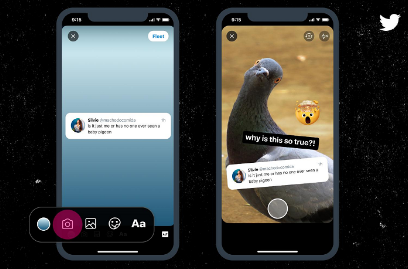 As you can see above, now, when you go to compose a Fleet, you’ll have the ability to tap on the camera and camera roll access icons within your Fleets composer tools (alongside the new ‘stickers’ option shown here, which Twitter added late last month). That will then enable you to add a larger visual element to your Fleet, providing more options for presentation and engagement.

Moreover, Twitter designer @shuangsta recently provided some further context on this function in testing, along with an example of how it might be used. 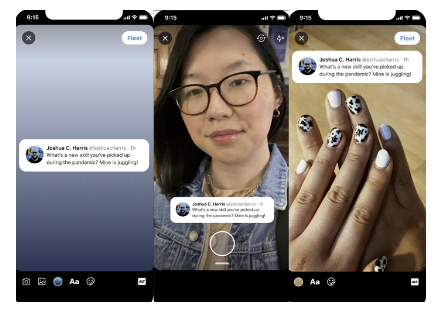 I mean, the only way for Twitter to catch up is by releasing new features like this, so it should still get praise for advancing the tool. But it still seems odd that Twitter released a Stories tool that was behind the others from the get-go, as opposed to a more developed, polished option.

As obvious, Twitter’s only way to catch up is by releasing new features like Fleets option, so it should still get praise for advancing the tool. However, it still seems odd that Twitter released a Stories tool that was behind the others from the get-go, as opposed to a more developed, polished option.

Still, Fleets does take up a superior position in the app, right at the top of user feeds, which no doubt makes it an intriguing option for many (including marketers), moreover, these new visual tools do add significantly to the Fleets offering.

Talking more about Fleets option, there’s a heap of ways these new elements could be used, and there will likely be some creative examples from brands in the coming months, which will spark more interest in the option.

The question we should be asking is, is Fleets actually good? Is it adding to the overall tweet usage process?

Well, it’s probably too early to say, as Twitter hasn’t released any official usage info. However, given the broader trend towards Stories use, and vertical communication stemming from other apps, it does make sense for Twitter to stay in touch with that shift via their own option, and again, these new elements, including stickers, do add to the process.

Aside from the new Fleets option, we hope to see more Fleets tools comping up soon, maybe even more advanced, AR tools or features that will really spark engagement and sharing from the tool.