VR headsets saw a huge rise in popularity in 2020, while today, Facebook has added some key functionality options that could significantly boost the usage numbers of its Oculus device – besides expanding adoption of VR more broadly.

Even though it may not seem like a huge innovation – today, Facebook has announced support for multiple accounts within a single Oculus device, and app sharing, enabling different users of a device to purchase different apps in the Oculus environment.

More About the Oculus Quest Devices:

Talking more about the Oculus Quest devices, Facebook explains: “VR is a social experience, and that doesn’t just mean online multiplayer. We know Quest has become a shared device for many of you. We want to make it easier to share your Quest with the people you care about, whether with a partner, a roommate, family, or friends.”

Moreover, up till now, Oculus headsets have only allowed for a single user account, attached to Facebook, which has limited usage to some degree within households. However, now, admin accounts will have the ability to add up to three more accounts besides enabling App Sharing on a single device.

Facebook Adds: “With Multi-User and App Sharing, you’ll be able to log multiple accounts into a single headset and share Oculus Store apps you’ve purchased with those additional accounts. Game progress and achievements will be unique to each account, so no more “Hey, are you done playing that game so I can start it over?” situations. You’ll also be able to maintain your own friend lists, browser history, privacy settings, and more – and can lock your account with an unlock pattern before handing your headset to friends or family.”

As we can see, this could essentially double the Oculus user count straight away. Moreover, it could also help to increase sales. As many people would already be testing out other people’s Oculus devices, however, having their own profile, along with their own data and information, could make the experience even more sticky, also prompt further purchases of Oculus devices.

Which, as noted earlier, saw a huge jump in 2020, as people sought alternative forms of entertainment. We can see that, in Facebook’s most recent performance update, the company’s “Other Revenue” figure (i.e. revenue not generated from ads) was more than double the same period in 2019. 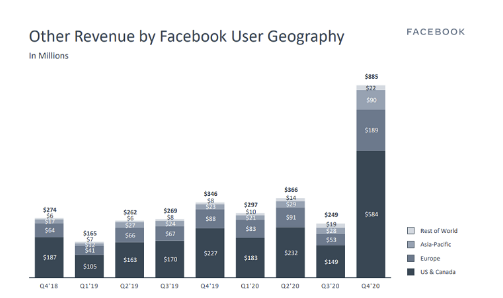 Additionally, Facebook CFO David Wehner clearly noted that this increase was largely due to strong sales of its Oculus Quest 2 VR device over the holidays. That’s continuously opening up a wide range of new opportunities and considerations for Facebook, which is already planning for the next shift for social interaction within virtual spaces.

Not only that but also, earlier this month, Oculus VP of Content Mike Verdu has shared a new update on the growth of the platform – and in precise, the growth of content, which is really the key element at this stage. Talking more about Oculus Quest devices, Facebook announced the integration of Messenger into the Oculus experience, the experience will enable users to chat via Messenger within the VR environment. These are all important advances, pointing to the next stage of VR, and increased adoption, through the addition of multi-account support, is another small step in this growth.

Additionally, Facebook will initially roll out multi-user and app sharing out to Quest 2 users as it continues to refine the experience. Eventually, the options will be available to all Quest users.