Twitter has launched an early beta version of its new, Clubhouse-like audio Spaces feature, moreover, it will see a small group of users invited to test out the new audio-only, virtual rooms function. 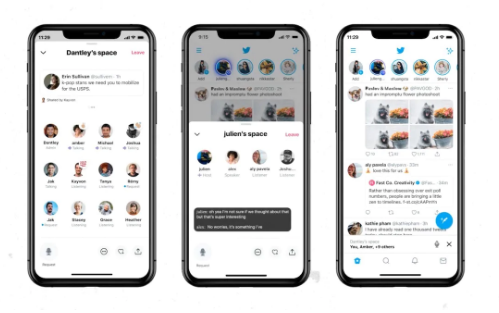 Based on the above screenshots, Twitter’s Spaces feature – audio Spaces- will enable users to create an audio-only meeting, also their connections can join, either to actively participate or to listen in.

Moreover, the audio meet-ups will be highlighted via a purple icon on the creators’ Fleets bubble, signifying when an audio discussion is in progress, besides who’s participating. 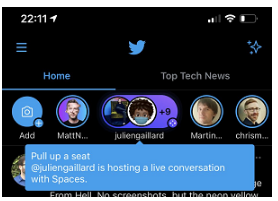 In light of the new Spaces feature, Twitter explains:
“The human voice can bring a layer of connectivity to Twitter through emotion, nuance, and empathy often lost in the text. We see this with voice tweets and voice DMs. sometimes 280 isn’t enough, and voice gives people another way to join the conversation.”

That means, this will be another option in order to engage on the social media platform, and it could be worth checking out as it gets expanded- though it is also worth noting that audio clip tweets haven’t exactly become a key communications option. And that probably doesn’t bode well for Spaces.

Anyhow, the integration with Fleets could actually make it a more engaging option, as users will be notified, right at the top of their feed, when their connections are broadcasting in an audio room.

We can see that Content discovery has always been somewhat problematic on Twitter, there’s no way of you knowing unless you follow the specific creator, which is not always the case.

Aside from the Spaces feature, boosting awareness via Fleets will definitely have advantages in this respect. However, the question remains, will audio-only rooms catch on, especially in a year when group video calls have seen such massive increases on every other platform?

Actually, Twitter describes Spaces feature as being like “a well-hosted dinner party” “At a bomb dinner party, you don’t need to know everyone to have a great time, but everyone feels comfortable at the table. We wanted Spaces to have that magic feeling too.”

Moreover, Spaces feels more like an extension of Fleets, as opposed to a feature within itself. Additionally, Twitter says that “a very small feedback group” will get access to the option from today.

Not only that but also Twitter’s testing reaction “similar to hand gestures” and live transcriptions in order to improve the experience. Also, Early users have reported the experience being fairly buggy, anyhow, it’ll take some time for Twitter to sort out the full experience.