Currently, TikTok is testing a new ‘Repost’ option with some users which enables them to re-share TikTok clips to their followers, along with the re-posted clip then displayed in their connections’ feeds.

As shown in the following screenshot, posted by user Kev Adriano (and shared by Matt Navarra) some users can now see a new ‘Repost’ button in their sharing options, which essentially amplifies that clip by re-sharing it in both the ‘Following’ and ‘For You’ feeds of your connections. 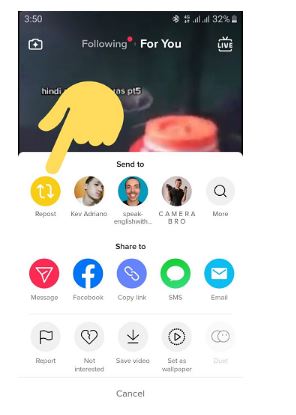 What happens when you re-post a clip? Your connections will be able to see that you’ve re-shared it in the video details, with any comments you’ve added to the clip.

Obviously, it’s another way to boost clips that you like, and share them with all of your friends at once, as opposed to sending each clip individually – even though it is crucial to see TikTok experimenting with re-sharing in this way while other social and messaging platforms are considering the negative impacts of such on their user engagement.

Some examples on that, Twitter, removed straight re-tweets as an option in the lead up to last year’s US election, in an effort to slow the blind amplification of political messaging and misinformation. Also, Twitter’s data showed that this approach kind of worked in prompting more thoughtful discussion via tweets.
On the other hand, WhatsApp has also implemented rules to limit the re-distribution of messages within its systems to stop the spread of viral scams and misinformation around the pandemic.

By making it easier to re-distribute posts, that then increases the possibilityof misinformation being more widely shared, as it’s just a tap away. Also while TikTok isn’t necessarily known as the main source of misinfo and harmful hoax campaigns, this adds the capacity to more easily re-share does provide more potential on this front, which could be problematic.

However, maybe TikTok simply sees this as a means in order to increase engagement by amplifying videos between friends that they all know each other will like.

Anyhow, TikTok’s “RePost” option is not available to all users as yet, so TikTok could still roll it back, however, it could provide another way to boost re-distribution, if you can prompt users to re-post your clips.