Today, Twitter has launched a new test of reformatted Explore tab, which displays tweets in a full-screen, vertical scrolling format. 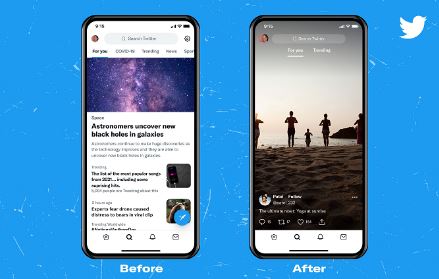 This looks familiar, right? Down to the “For you” and “Trending” tabs.

Pretty much, the display looks exactly like TikTok, with a Twitter navigation bar at the bottom, once again underlining the massive influence that TikTok has had on social app development, as every social media platform scrambles to keep up with the latest trend.

Moreover, you could argue that the Stories format had a similar effect, with almost every social media platform trying their hand at full-screen, tap-to-advance posts too.
However, the TikTok effect seems even more pronounced, and with a billion users and still counting, it actually makes some sense that the other apps should look to align with habitual trends in an effort to provide a more compelling user experience.
Moreover, in any event, the emotional response to such doesn’t matter. So what actually matters? is whether it gets people using Twitter more, as well as discovering new content through this format.
Regarding this aspect, there are doubts. The main allure of TikTok in this aspect is that it’s so compelling, because its algorithm is pretty good at showing you more and more of what you like, and that keeps you glued to the feed.
On the other hand, Instagram’s Reels feed is not as good at the same thing. Obviously, TikTok’s algorithm is more like the secret sauce that everyone tries to crack it. However, Instagram seems to be getting closer to cracking it but nothing is as compelling as TikTok’s feed.
However, while Twitter might be able to replicate the UI, that’s really a lesser element- even though it’ll be interesting to see whether Twitter sees more Explore engagement as a result, which will then see it launch the new display more widely.
Note that, the new Explore tab display is in test mode “in certain countries”, though India, where TikTok was massive before it was banned, appears to be the main focus.