Twitter is stepping up its game with the emojis on its platform, after launching DMs reactions earlier this year, Twitter decided that it’s not done with emoji responses yet, and testing new tweet reactions.

Well, the screenshot below shows everything, it is shared by reverse engineering expert Jane Manchum Wong: 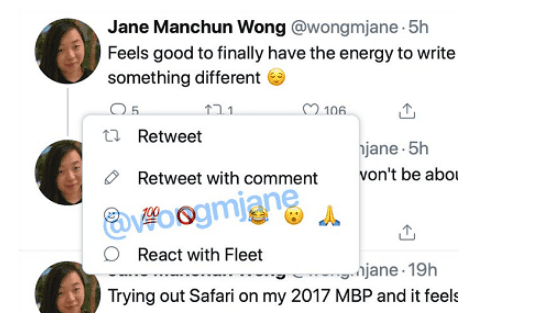 Twitter is testing a new option that would make users able to respond to tweets with an emoji -tweet reactions-, among the various other response options which also include “React with Fleet”, about Twitter’s evolving Stories-style-option. However, there is no news about how would it work.

The thoughts about it are a lot, would a reaction count come up in a separate panel on the tweet display? or will the reaction be attached to a retweet?
Moreover, that is what Twitter tried in 2015 when its first look to launch the tweet reaction response.

On the other side, Facebook was working on emoji reactions and they were released in 2016. However, Twitter also began to test various formats, even though they didn’t latch on the trend, and eventually, Twitter never ended up releasing them.

But of course, they tried out a few different formats, on the other hand, people were starting to use emoji on every social media platform and the emoji usage has continued to rise, also every other social media platform have added their reactions-style options, so it has become an increasingly habitual behavior and an easy way for people to connect and respond to each other without having to write a specific comment.

Twitter now is seeing a high usage of reactions in DMs, which is believable to think that there is a high demand for tweet reactions not only in DMs.

It would be an amazing update from Twitter on the social media platform, as it will make communication easier, on the other hand, if Twitter doesn’t launch the option, it will have a range of implications on creative options, data tracking, and trends.

However, it could also be a fresh update. In light of that subject, there’s no update from Twitter on a potential launch of the “Tweet Reactions” option.