Facebook -the parent company which owns WhatsApp– is working on new WhatsApp animated stickers, this would be active within the chat window besides being active as you keep scrolling.

According to what’s reported by Android Police “The feature showed up in beta v2.20.194.7 and then disappeared in v2.20.194.9. When it’s working, stickers from animated packs are live in the conversation, though they only animate once and stop. You need to scroll up or down to trigger them to play again.”

Andriod Police also notes that the functionality of the WhatsApp animated stickers might not be complete yet, however, it looks like that this is how they will appear to users, and respond, in your WhatsApp chat streams.

In addition, it would definitely add another element to your WhatsApp sharing options. Even though WhatsApp has only made it possible for users to add static, and regular stickers in chats, while on the other side, the overall functionality of WhatsApp has been largely limited to text chats.

WhatsApp has its own Stories like a tool, anyhow, Facebook has been exploring more and many ways to incorporate more functionality. The new WhatsApp animated stickers would be only a small element in this matter, however, it is another step forward for WhatsApp and cannot be neglected.

Additionally, it might also be another small step forward in Facebook’s broader plans for the full integration of its messaging applications.

Theoretically, each platform owned by Facebook -Messenger, Instagram, and WhatsApp- will need to support the same tools to make sure that users can share the same across the three platforms, and this in case if Facebook is to fully incorporate the messaging functionalities of the three platforms.

Surely, the exact same animated sticker pack in the example above is also available in Messenger. 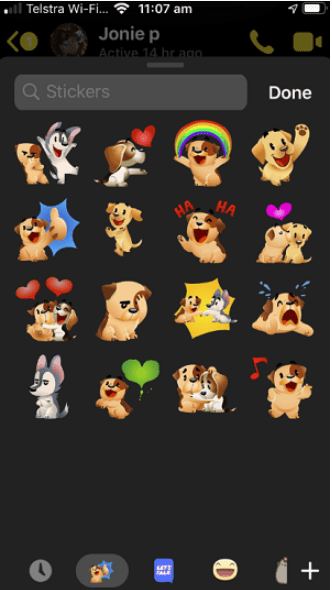