Recently, we have seen social media platforms such as Facebook releases new apps to facilitate communicating with each other like CatchUp App. It should be mentioned that also Twitter has begun live testing of its new feature which is a new DM chat window on the desktop, it provides a Messenger-style, picture-in-picture display for the messaging discussions on Twitter.

The screenshot below from user Calum Young – shared by social media expert Matt Navarra- shows the new option displays active Twitter DM chats but in a smaller, and sub-window at the bottom right of the screen, this is similar to the display of Messenger chats in Facebook, along with LinkedIn’s messaging chats. 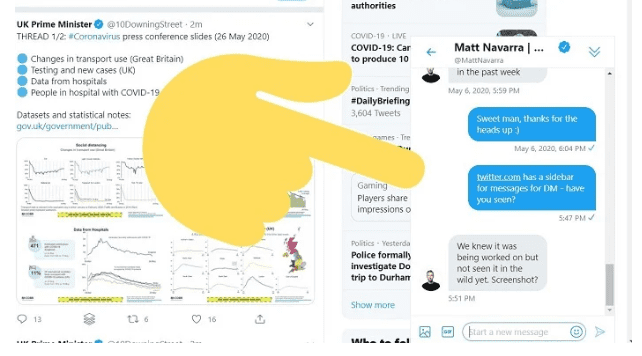 The Twitter DM chats’ new format has been tested for a while by Twitter. Reverse engineering expert Jane Manchun Wong also posted screenshots of the same last month. 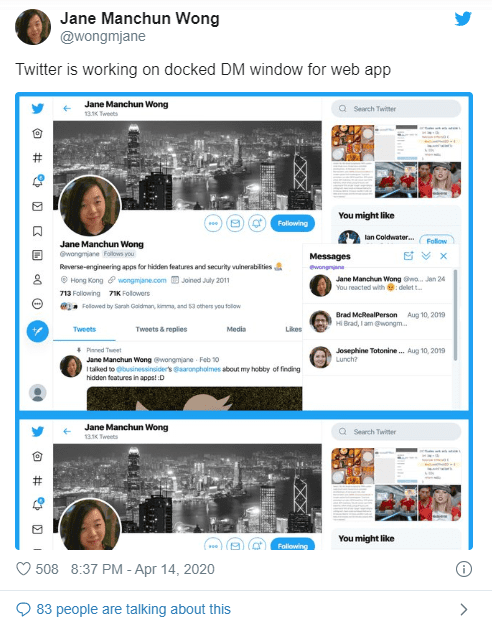 Regarding all Twitter updates, some users look offended that Twitter would try to replicate Messenger-like features in the app, however, the addition makes sense.

Twitter still sees increased usage of direct messages, as people reduce their public posting activity, and it’s been working to align with this, rolling out a range of Twitter Dm updates and feature additions over the past year.

The new function makes it easier to engage via Twitter DMs while using the app, and that would be helpful if you want to keep the conversation going while checking different tweets.

On the other side, it could also facilitate increased content sharing via Twitter DMs, for example, if you are talking with a friend and a new tweet comes into your timeline which you would like to share, easily, you can add those tweets into the discussion and have both your timeline and the chat active on your screen.

Generally, it looks like a functional and handy option, and if you don’t like it you will be able to deactivate it.
The feature is being tested, yet, it is available for some users.