Twitter has launched the next phase of its creator payment program, along with a live test of a new tip jar option on selected user profiles, which will enable individuals to collect payments from their audience, as a means to support their efforts.

show your love, leave a tip

now testing Tip Jar, a new way to give and receive money on Twitter 💸

As you can see above, the new Tip Jar option, accessible via a cash icon at the top of eligible profiles, enables users to make payments to another user by connecting through to the payment provider of their choice.

In light of Twitter’s tip jar, Twitter explains: “We see you – sharing your PayPal link after your Tweet goes viral, adding your $Cashtag to your profile so people can support your work, dropping your Venmo handle on your birthday or if you just need some extra help. You drive the conversation on Twitter and we want to make it easier for you to support each other beyond Follows, Retweets, and Likes. Today, we’re introducing Tip Jar – a new way for people to send and receive tips.” 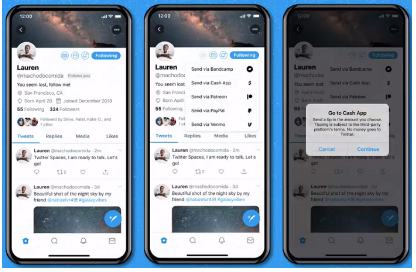 Twitter’s Tip Jar feature is in test mode at the moment, so not all users will be able to add it, however, everybody using Twitter in English will be able to send tips to applicable accounts, on both iOS and Android.

In light of Twitter’s Tip Jar, Twitter says that the initial test pool for tipping will include ‘selected creators, journalists, experts, and nonprofits’.

“You’ll know an account’s Tip Jar is enabled if you see a Tip Jar icon next to the Follow button on their profile page. Tap the icon, and you’ll see a list of payment services or platforms that the account has enabled. Select whichever payment service or platform you prefer and you’ll be taken off Twitter to the selected app where you can show your support in the amount you choose.”

Twitter’s Tip Jar supports payment via Bandcamp, Cash App, Patreon, PayPal, and Venmo. Twitter is taking no cut of any donations at this stage.

For those who have access, here’s how to set up tip jar payments.

The option has been in testing for some time, with Twitter showing a preview of the function, among different other creator revenue tools in development, at its recent Analyst Day showcase.

Variations of the on profile display for the option have also been spotted in testing:

Providing more monetization options is now a key element in Twitter’s growth strategy, with the idea being that such tools will be able to help Twitter keep its top users tweeting more often, on the other hand, incentivizing them to build more reliance on the app.

This, ideally, will help Twitter to increase overall time spent within its app by keeping its most engaging voices more active, while its coming eCommerce as well as newsletter tools, among other functions, will also help to expand Twitter usage, and broaden its functionality.

Generally speaking, tipping has already proven popular on other platforms as a means for fans to show their support, and the more Twitter can start to change user behavior, also get people used to paying for things on-platform, the more it can start to shift habits, and make such process an accepted part of the in-app ecosystem.

The Tip Jar feature will be an interesting experiment, as it’ll be interesting to see what Twitter users are actually willing to pay for and whether all those followers you have are actually as interested in supporting you when it comes to real money changing hands.

If Twitter’s Tip Jar works out, it could become a valuable, and critical addition for Twitter, and a solid revenue stream for top users, keeping their tweets flowing, and the app’s engagement stats humming along.