Technology is a double-edged sword, also it’s this struggle between positivity and negativity which happens throughout this consumer trends report – whether that’s in the economy, in healthcare, in the digital space, in privacy, or in anything else with a future focus.

It is the consumer’s struggle between pessimism and optimism which will take center stage in 2020. Without further ado, let’s get started with consumer trends reports.

In a world of near-perpetual connectivity,  expanding tech-induced anxiety shouldn’t come as a surprise. Apparently, though, there’s an expanding consumer segment who feel like they’re being left behind by industry innovation.

The chart below shows that tech angst is growing throughout the years; here is a chart of the percentage of internet users who say they don’t understand new technology and computers, 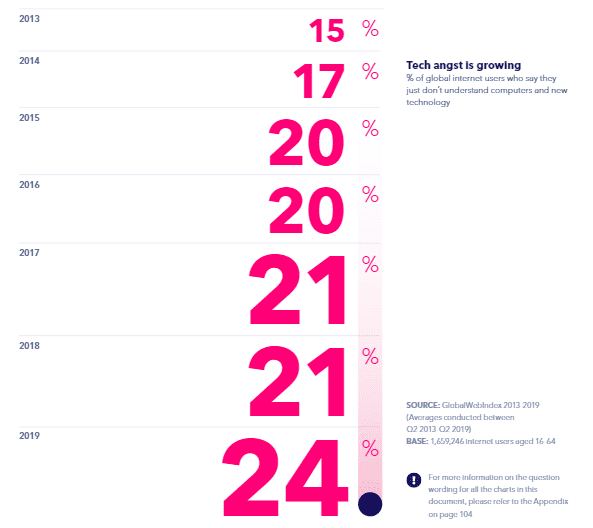 Researching Health Issues is a Key Reason for Using the Internet:

According to the consumer trends in the 2020 report, 70% of internet users in the U.S. and the UK believe technology will play a key role in managing their healthand wellbeing in the near future.

Moreover, Half of U.S. and UK consumers say the ability to consult with a doctor by a phone/video call instead of in-person would help them manage their healthcare more effectively. Additionally three-quarters of consumers use information or recommendations found online.

The following chart shows the percentage of global internet users who say researching health issues is an important reason for using the internet. 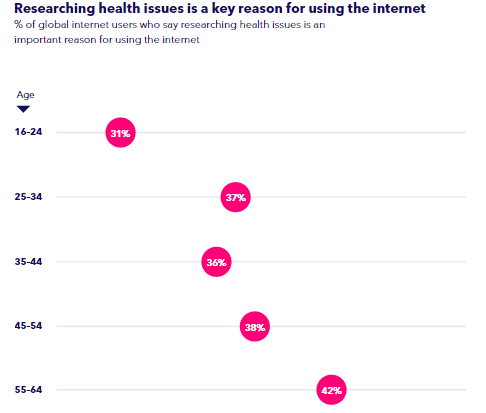