To be honest, it’s a little bit late in the year for major system shifts, however, Meta has snuck in one more update ahead of the holiday break, along with the announcement that it’s making some huge changes to its ad objective listings in Ads Manager, and that’s to simplify and streamline the campaign set-up process by enhancing the focus on the most practically relevant tools and options.

So, that means that the Ads Manager interface will get an overhaul – as shown in the below screenshots-, along with the current set-up process on the left, also the new, ODAX system on the right: 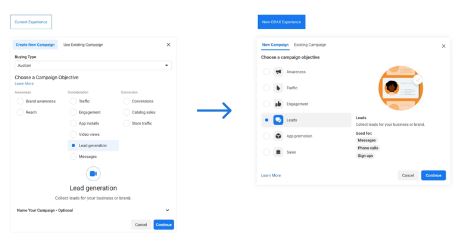 But what is the main difference? The main difference, as you’ll note, is the decrease in objective options from 11 to 6, and a move away from the ‘Awareness’, ‘Consideration’ ‘Conversion’ banners, in order to make it more obvious what each objective stream actually is, and how they can be used in your promotions.

Which makes sense. Those segments are more aligned with ad industry lingo, which your regular SMB owner is probably not as familiar with, and by stripping the objective options back even further, that could make it easier for newcomers to generate better results, by honing their options onto the ad tools and processes that will work best for their aims as well as objectives.

Moreover, you can see the shift in objective alignment in this chart: 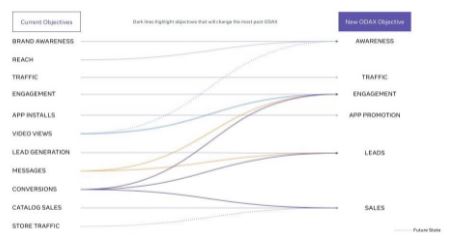 Actually, Meta says that the changes, which will mainly impact advertisers that use Conversions, Messages, as well as Video Views campaigns, will be slowly launched through 2022, so there’s no set date, as such, for a switchover or change, but you will see it come through at some stage.

At the moment, Meta is alerting those that use its ads API to update their processes in line with the change ahead of any impacts – so if you’re an everyday advertiser, it won’t be a major change straight away. However, a change is coming, which will impact your Facebook and Instagram ads process.

It might be good, along with a more streamlined, simplified ad set-up system, which will help to better align your campaigns with your actual, desired objective. Anyhow, it could be limiting in some ways too.

Apparently, we have to wait for the new year to know about the new system.