/ Indicators / Smartphones Are the Most Used Devices by Millennials Internet Users With a Rate of 97%, 2018 | GlobalWebIndex

Smartphones Are the Most Used Devices by Millennials Internet Users With a Rate of 97%, 2018 | GlobalWebIndex

Millennials are individuals who were born between the 1980s and early 2000s.

They are considered to be the most connected generation, as they grew up during the internet age where people communicate through social media and emails.

Millennials are used to doing so many day-to-day activities with just a few clicks on their smartphones, PC, or laptop.

Smartphones are central to millennials’ digital lives. it is the most dominant portal of information and communication technology smartphones are powerful communication devices not only do they have a commanding lead over PC and laptops. Practically all online millennials own a smartphone, they are most likely to identify their mobile as their more important internet device, and they are spending almost as long online via mobile as via all other devices combined.

Let’s take a look at the devices used to access the internet by Millennial users in 2018:

Take a glance at the most owned devices by millennial users: Get a step closer to reaching Millennials and reach them through emails, with Mailerlite, you can do it all! It is one of the best email marketing tools and website builders for businesses of all sizes and shapes, and it is simple to use!

Jumping to 2022, let’s see what the top devices used to access the internet by Millennials:

You can do so many with one tool like GetResponse, you can engage with your customers, grow your audience, get your business online, boost online sales, and more! Go and check it now!

Also, looking back to the internet usage statistics in 2021, in the US, 58% of Millennials said that social media is an important information source when making shopping decisions.

Also according to the statistics mentioned in the devices used to access the internet, half of Gen Zers agreed, on the other hand, 12% of baby boomers said their shopping is significantly influenced by social media. 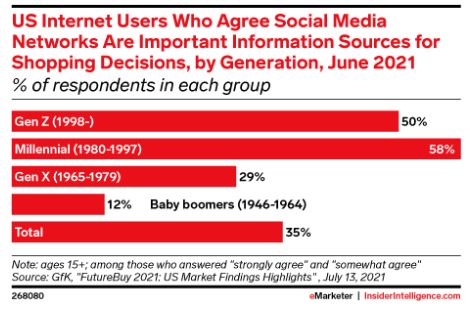