It is proven that only 9% of American consumers say they feel represented in advertising. That percentage is really low for an industry that spends so much time, money, besides talent on targeting consumers.

The question is why is there such a disconnect between the reality of American culture today and the messages that advertisers reflect back at us?

Let’s go through this report and understand how the American consumer has changed over the last few years and continues to evolve in the poignant cultural moment we find ourselves in.

The New American Consumer: 32% of Americans Do Not Trust Traditional Media Anymore

According to the new American Consumer research, 4 in 10 Americans say they distrust social media companies. The following chart shows the percentage of internet users who don’t trust the following media institutions at all.

Advertising to Reflect Both Culture And Visibility:

American consumers were asked about ads that reflect their culture. The following chart shows the percentage of Americans who agree with the statement “I prefer ads that reflect my culture” 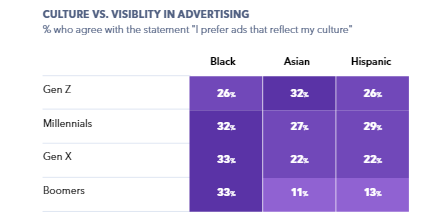 Based on the new American consumer research, both culture and visibility in advertising are important to diverse audiences.

On the other hand, the following chart shows the percentage of Americans who agree with the statement “I prefer brands that feature celebrities who look like me on TV” 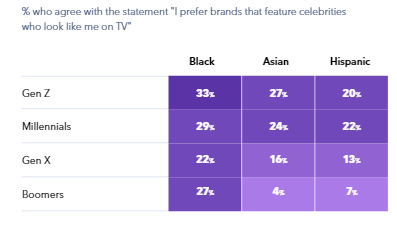 This is an important distinction, also for brands who are looking to craft multicultural marketing strategies aimed at youth vs. older generations of different groups, it can shape a more sensible and well-informed approach.

The Table of Content of “The New American Consumer” Report: