The impact of social media on the global communications landscape over the past decade has been profound, during that time, social networks have become mainstream, as social channels have grown from nascent services to media behemoths.

The Middle East has also seen the impact of this evolution in communication. As elsewhere, social media in the Middle East and North Africa (MENA) is used for a wide range of purposes from information gathering and entertainment, through to e-Commerce activities and different forms of creative expression.

Take a glance at the social media platforms statistics in Qatar, 2019: 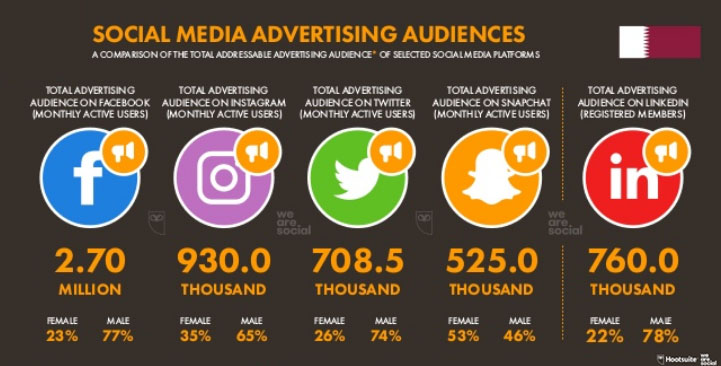 A Figure Shows The Social Media Advertising Audiences in Qatar, 2019.

We Are Social. They are a global agency. They deliver world-class creative ideas with forward-thinking brands. We Are Social belief in people, not platforms and the power of social insight to drive business value. They call this social thinking. With an international team of over 700 and offices in New York, Madrid, London, Paris, Milan, Munich, Berlin, Dubai, Singapore, Hong Kong, Shanghai, Beijing and Sydney their mission is to put social thinking at the center of marketing. We Are Social work with clients including Adidas, Netflix, Google, HSBC, Renault and Audi on global, regional and local projects.
View More